Welcome to my stop on the blog tour for Anita Davison’s latest Flora Maguire mystery: A Knightsbridge Scandal.

1903 London is bustling and glamorous. With troubling secrets simmering, and worrying signs of war, Flora Maguire must solve a deadly mystery which leads right to the heart of the corridors of power.

Flora Maguire has escaped the country to enjoy some time in fashionable Knightsbridge, London. Extravagant shops, exuberant theatres and decadent restaurants mean 1903’s London is a thrilling adventure, but there are dark secrets threatening from the continent.

When the body of a London socialite, and leading light of the burgeoning women’s movement, is found outside The Grenadier public house, Flora can’t resist investigating. Mysterious letters are discovered in the victim’s belongings, strange links to the foreign office and why do the clues keep coming back to the assassination of a Baltic king?

As Flora closes in on the killer, it soon becomes clear she is no longer safe in London, but will her husband Bunny be able to get to her before it’s too late?

An excerpt from the novel:

Flora alighted onto the platform into clouds of white smoke from the steam engine that hissed beneath the massive iron and glass canopy of Waterloo Station. Porters darted between travellers pushing squeaky-wheeled trolleys loaded with luggage towards the line of hansom cabs that waited beside the platform; the odours of hot horseflesh wet leather and manure mixed with the sweet fragrance of dried lavender from the flower seller’s stalls.

Flora handed her maid a portmanteau, then followed in the wake of the porter who had careened off with their luggage, her neck craned to keep him in sight. Disembarking passengers jostled on the platform as Flora carved her way through ladies in wide hats and harassed looking nurses holding dawdling children by the hand. The soot smuts on their faces reminded her of childhood train journeys spent with her head stuck out of the window, eyes narrowed against the wind as it tugged at her hair; something every child should do at least once.

Sally hurried along the platform beside her, the bag hefted on one hand and three hatboxes bouncing like balloons on their strings in the other.

Suitcases bumped Flora’s shins, their owners making no effort to move aside, reducing her progress to a series of shuffling steps and starts. Spotting a gap in the crowd, she dodged between two slow-moving matrons, only to collide with a man in a black homburg hurrying in the opposite direction. He barely paused to apologize, simply lifted his hat an inch before disappearing into the crowd.

Flora glared at the miscreant over her shoulder, muttering at his lack of manners as her turn arrived at the barrier.

The guard clipped their tickets with a machine hung around his neck, releasing them into the arched cathedral roof of the main hall. Coming to an uncertain halt as the crowd disbursed into the vast expanse of the station, she glanced up at the monochrome, four-sided clock that hung from the ceiling,

‘He said he would be here to meet us.’ She bit her lip as the first pangs of anxiety gnawed at her. ‘Our train arrived on time, so where is he?’

What if he had forgotten her? Would she be able to find his apartment unaided?

‘He must have been held up.’ Sally transferred the cumbersome bag to her other hand, flexing her fingers with a grimace. ‘Don’t fret, Miss Flora, I expect he’ll be here directly.’

‘I’m not fretting.’ Flora fidgeted, irritated at having been so transparent. ‘I’m merely surprised he isn’t here waiting for us.’ For the tenth time since leaving Richmond, she wondered if it had been wise to agree to this visit on her own; misgivings her husband had dismissed.

‘I would accompany you, my love, but I’ve a complicated legal case on at the moment. After all, William is hardly a stranger; you’ve known him all your life.’ His reasoning had not acknowledged her anxiety at all.

‘Perhaps.’ Though not as my father, a voice inside her head reminded her. The last time she had seen William, her behaviour had been less than cordial. When the truth of her parentage had come to light, she had laid the blame squarely on him, fairly or not. Circumstances had kept them apart since then, though his invitation to stay at his London apartment came as no surprise, but one Flora had thus far avoided. Now she would have to prepare herself to face him all over again.

‘Where’d that porter go?’ Sally dropped the portmanteau at Flora’s feet with a relieved grunt. ‘I’ll have something to say if he’s run off with our luggage.’

‘I very much doubt that. He has a job to do, and not everyone is disreputable.’

‘You weren’t dragged up in Flower and Dean Street,’ Sally muttered darkly. ‘Can’t trust no one down there.’

Flora pretended not to hear, immune to Sally’s tendency for drama and a belief that lurid stories of a childhood in Whitechapel gave her notoriety among those who had led more affluent lives; a judgement made on virtually everyone. Flora raised herself on tiptoe, her eyes narrowed in an effort to locate the porter’s face among the noise, smoke, and clamour of the busy station that had begun to make her head pound.

‘There it is!’ Sally pointed to where Flora’s elephant grey trunk with its military style fastenings sat on a trolley, their porter idling in conversation with the news seller, apparently confident of his fee.

Sally hurried towards him, her voice raised in protest as she heaved the bag she carried onto the trunk, piling the hatboxes on top. The largest tumbled off again and rolled across the concourse floor. With a theatrical groan and slump of her shoulders, she gave chase and after a tussle with an urchin boy who got there first, grudgingly parted with a coin before stomping back to the trolley and returned the box to the pile.

‘Mrs Harrington?’ An unfamiliar voice drew Flora’s attention from the comic sight of her annoyed maid to where a man stood a few feet away; a bowler hat held in both hands at waist level.

‘Yes, I’m Mrs Harrington.’ She gave the concourse a final, swift glance in a last effort to locate William, then turned to the young man. ‘May I help you?’

She judged him to be somewhere in his mid-twenties, and definitely someone she had never met before. Standing an inch or two taller than she, with a compact, but substantial build. Symmetrical features sat beneath arched brows with startling eyes so dark, the pupils looked the same colour as the irises.

‘And who might you be then?’ Sally stepped between Flora and the stranger, her chin lifted in challenge.

‘My name is Peter Gordon.’ He took in Sally’s belligerent expression with a wry smile of amusement. ‘I’m an associate of Mr William Osborne; he sent me to meet you.’

Flora had expected him to have an accent to go with his Mediterranean looks, but his diction was pure Home Counties.

‘Can yer prove it?’ Sally demanded.

‘Sally,’ Flora warned, sotto voce. ‘Although my maid does have a point, sir. I was not expecting to be met by a stranger.’ Despite her uneasiness, there was something compelling about him.

My review of A Knightsbridge Scandal can be found here. 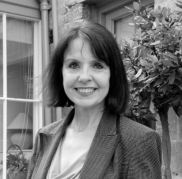 Anita’s earlier novels are set in 17th Century England, with a family saga set in Exeter during the Monmouth Rebellion and a biographical novel about Elizabeth Murray during the English Civil War in Surrey. Her fascination with the revival of cosy mysteries made her turn to the early 1900’s for inspiration where she found Flora Maguire lurking. The series of five novels was taken up for publication by Aria Fiction, a digital imprint of Head of Zeus Publishing.

Flora’s Secret is available here  and Betrayal at Cleeve Abbey is here.