Skip to content
HomeBlooms, Books, and the Great Launch Party That Wasn’t!

As many of you know, I’ve been gearing up for the event that would have marked the proudest moment in my writing career: the launch of the paperback edition of Maid of Oaklands Manor. However, due to a glitch at the despatch hub, the books were delayed and not marked as event items, so they didn’t arrive at the Waterstones branch where the party was to take place.

At the time I was hugely disappointed — and embarrassed (as they say, pride goeth before a fall) —  but once I’d put the word out, and had some lovely responses and encouragement, I stopped being a whinge-bucket and thought about it rationally: it was the party that was cancelled, not the launch, and although there has been some delay, still, in getting the books onto shelves, it WILL be there. Me! My book, my dream, in my favourite shop, for me to grin at whenever I walk past. My beautiful author copies arrived that afternoon, and yes, I cried a bit more.

Plus, I’ve been left with almost (ahem!) a full case of the most delicious Prosecco I’ve ever had. Laithwaites, I love you.

Clouds, silver linings, all that happy stuff. You know how it goes.

I also received these gorgeous flowers from Piatkus on release day. That was completely unexpected, it was always just something that happened to other people! 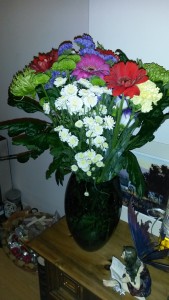 So what’s next? Well, I’ve been asked to re-schedule, and I probably will, but of course it will be re-billed as a book-signing event, not a launch party. Which feels a bit pretentious, if I’m honest, but an awful lot of people have said they’d like it to happen, so I’ll swallow this feeling of the faintly ridiculous, and buy myself a new pen. Watch my Twitter and Facebook feeds for dates/times – and if you haven’t followed and/or friended me yet, please do, I’d love to hear from you.

In other news: I’m working on book 2 in The Penhaligon Saga. Book 1 (Penhaligon’s Attic) is with the publisher, and currently has a paperback release date of December 1st. It’s available for pre-order now, but there is no blurb, and no cover, so tread warily! 😉

Also exciting, is that large print and audio rights to Maid of Oaklands Manor were recently picked up by Magna, who are part of Ulverscroft.  I hope they’re able to do something with those rights, so stay tuned and I’ll let you know when I hear more.

So while Lizzy is out there doing her thing, the two sequels are trundling along, still being ignored by their publisher, but getting fantastic reviews. I’ve asked about the chance of a print run for them, and basically been told it’ll never happen. Sagas (mine, at least) are apparently destined to be digital-only, and, according to Carina UK, are only worth about £2 each. Ho hum.

One thing is absolutely certain: I’ve learned to never again split a series between two publishers. If the subsequent books in the new Cornish series aren’t picked up by Little, Brown, I will self-publish them. They feature some familiar characters, and will eventually meet up with the Oaklands story once they pass the time frame set out in that series (1917.)

On the — much larger — plus-side: my self-published Lynher Mill series is still being appreciated by its readers, so I’m more than happy there! I still love this series SO much, and I can’t wait to write more of it. I feel a bonus novella coming on 😉

Thanks for reading! As always, I’d love to read your comments, either below or on the FB link.

6 thoughts on “Blooms, Books, and the Great Launch Party That Wasn’t!”